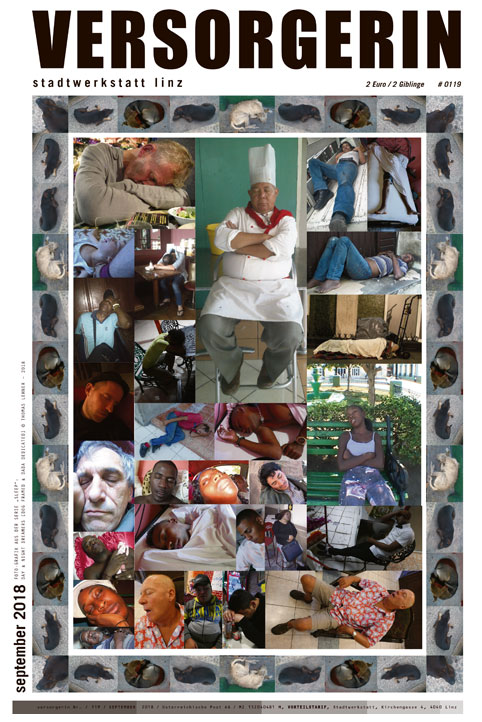 In the Beginning There Was the Outside

Sleep, as a different form of consciousness implicates the question about consciousness per se. Harald Purrer adresses evolution, anaesthesia and the relationship between inside and outside.

It was only via the closure of a cell membrane, hence a marcation between inside and outside and the establishment of an internal milieu, that life became a possibility, and, again, regard the ping pong: also death, since the upkeep of a concentration gradient between an exterior and an interior demands energy, and since thermodynamics forbids a perpetuum mobile, it also establishes limits to life.

What has this got to do with death and with sleep?

Well, one implicates a familiarity when sleep is seen as death little brother and, more scientifically, constant deprivation of sleep leads to death. Fatal Familial Insomnia is a rare, inhabitated sleep disorder that usually occurs between the age of 37 and 61 and leads to death within months or, at best, two years.

If you drift through the history of evolution, you get confronted with a new, spectacular closure: consciousness. Impatiently, you may ask: »What has this got to do with sleep?« Well, already the great Wolfgang Ambros (»Zwickt‘s mi, i man i dram«, note: austrian songwriter) distinguished a wake consciousness from a sleep/dream consciousness. As sleep is concerned, one differentiates between more or less unconscious N-Rem-phases and conscious Rem-phases (involving dreams, and with activities of specific regions in the brain). Nevertheless, dreams can also appear in N-Rem-phases1.

If we consider Euglena, we have a unicellular organism with a photosensitve »spot«; when hit by light a flagellum gets activated and Euglena moves toward light. There is distinction between darkness and light, there is perception. Can we refer to consciousness in this case? Rather not. There is no »I«. It is insufficient that something is perceived, also the perception itself needs to be perceived.

A simple and elegant description, to be taken literally i.e. not to be mistaken for an explanation, goes: »Consciousness arises when the difference between interior and exterior becomes internally represented.« That means a closure, but also a doubling, a condensation that makes a core »I« more compact. So far, so little clearness about that. An interior/exterior that gets thrown into the inside and gets projected to the outside to represent reality.

Perhaps another anecdote that potentially makes you dizzy: »With the Big Bang (as long as you belive in it) spatiality evolved out of non-spatiality, out of the immaterial evolved matter. In the history of evolution out of that which is spatial and material (res extensa), the brain, again evolved something that is non-spatial and immaterial: consciousness (res cogitans).« SPOOKY

Interestingly, despite all »non-spatiality« of thinking, most people would localise thoughts to be generated in the head, but not, for instance, in their feet (Except: Joseph Beuys »Ich denke sowieso mit dem Knie«, note: »Anyway I‘m thinking with my knee«).

Up to now, there is no generally consistent theory about consciousness, which triggered Peter Pieri to write an essay »What Makes Consciousness a Mystery?« where he speculates that our inability to solve that enigma isn‘t temporary, but general. »There is, at a specific point in the evolution of life on Earth, which we do not know and whose foundations we do not need to know, something new, something spectacular arising, something … incomprehensible. Our thread of consciousness, produced negatively backward in time, gets torn apart and gets confronted with a mystery. We are at the … limits of our humour. That … incomprehensible entity is consciousness. I shall now, as I think in the most clear-cut way, illustrate that consciousness is not only inexplicable from our momentary state of knowledge, but that it is inexlicable in itself and by the nature of things.«2

A fundamental problem lies, as already mentioned, in a lack of distance, there is no abstraction over itself possible, as consciousness describes what consciousness would be. The eye does not perceive itself (and a mirror is of no use). Equally unclear is how the problem of Qualia could be solved. We can, through analyses of brain waves or PET-scans, recognise that a person, for instance, experiences fear, but how that fear is experienced by the person himself, remains a mystery nevertheless. In his essay »What it is like to be a Bat«, Thomas Nagel illustrates how we may investigate the brain of a bat, even concerning the micropotential of a single neuron – no such facts and findings could ever tell how it feels being a bat.

The first-person-perspective can only be explained in a limited way from the outside. So even claim that there isn‘t even anything to explain. The consciousness of an »I« may be a romantic anachronism, a retrospective instance of justification that tries to calm itself through a constant paranoia.3

For the anesthetist, the problem of consciousness is quite easy as concerns his profession. Under total anesthesia, the patient is unconscious, i.e. the aim is that apart from analgesia the patient does not have memories or awareness during the time of narcosis. For the anesthetist, consciousness can be equated with being awake and it gets tested via spatial, temporal and personal orientation. The exact mechanism of the medication is not known. Remarkable is that the inert gas Xenon produces unconsciousness although, as an inert gas, it does not enter chemical compunds. It is assumed that Xenon accelerates in the cellular membrane of the nerves and hinders electrical exitability. A complete narcosis is not comparable to sleep but rather a deep unconsciousness.

A final anecdote: The spiny anteater is the »last« animal (within evolution) that does not dream (no REM-dreams). Any other animal that comes »later« in evolution, experiences dreams. 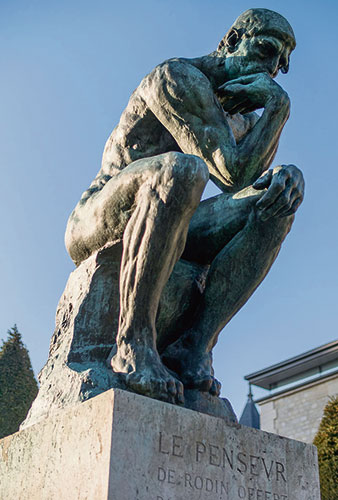 Is he thinking with his head or knee? (Bild: Gemeinfrei)